Here are my current running race PRs and results from 2013 races.


Posted by Kaitlin (runforsushi) at 6:59 PM No comments:

Howdy, pals! It's been a while. I'm pretty much done updating this blog (for now) as I've become super busy with grad school. It has been a good place to store my running times though!

After much dismay with injury, here's my 2012 race report (new PRs in bold!):

And as I didn't spend a ton of time running this year, I went to a lot of concerts in my spare time. Here's a list, with artists in bold meaning they especially rocked.

Happy 2013! Find me on Twitter or GitHub if you want to stay connected.

Phew! I once again managed to squeak through December, but only barely. Thanks for adapting to the blog hiatus-- it's now over! Here's what I was up to instead of blogging. 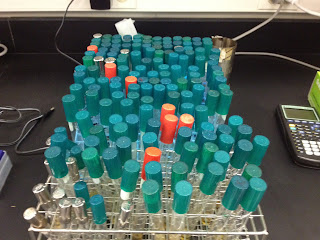 Studying for and taking finals. 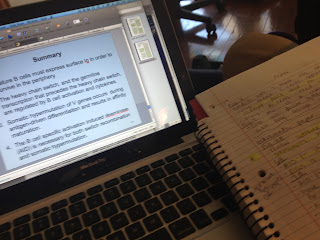 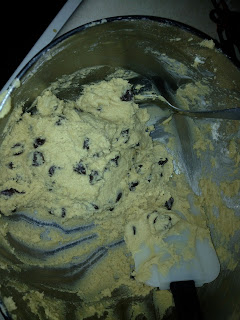 Presenting at a research conference. 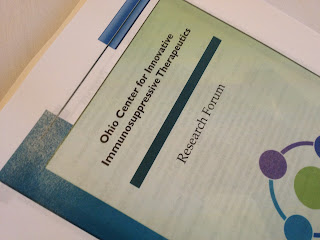 Putting up a Christmas tree. 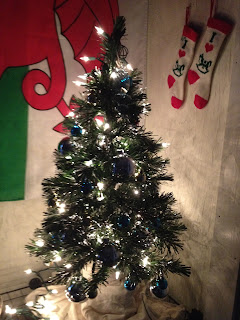 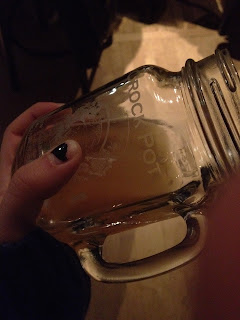 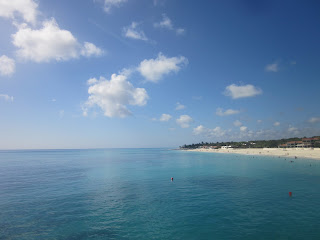 Seeing pink flamingos in the wild and flipping out. (a birder's dream!) 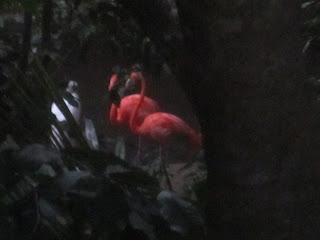 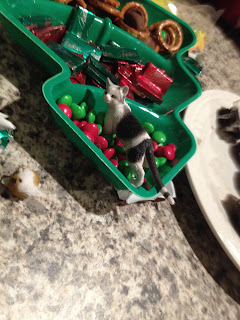 Putting my laptop on my cat. 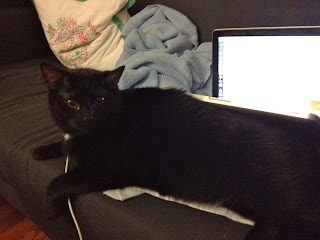 And a hat on my friend's dog. 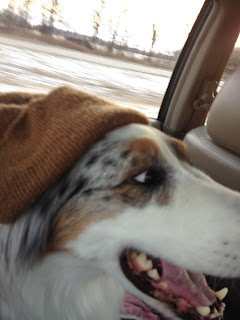 And spending time with family. 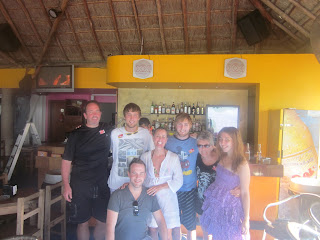 Now that the bulk of the craziness is over, I'm feeling a bit more refreshed and ready to tackle the new year-- including starting training for my second marathon! More posts to follow soon; I'm back, baby.

how was your December?
Posted by Kaitlin (runforsushi) at 2:17 PM 3 comments:

It's that time again: finals week.

Much like last year, I've inadvertently taken a blog and other social media hiatus.

Will return to regularly scheduled programming after this:

The Blog Turns One

In the midst of post-Philly work and Thanksgiving, I missed an important day: the blog's very first birthday!

Last year I started this blog as a way to keep up with my family and friends, share some recipes and document my running and races. What's evolved has been amazing: connecting with the online running community, researching important food issues and sharing the grad school life has become something I look forward to each week. 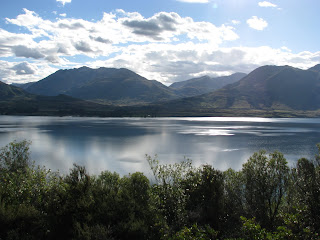 So as the blog turns one today, I want to take a look back at RFS posts and highlight the best (and worst?) of the blog so far.

The First Post: Grad School Is... I wrote this post about grad school to show family what my life had been like the past few months. I later followed up with another post this summer, "Grad School Is... 2" and it hasn't changed that much since then. 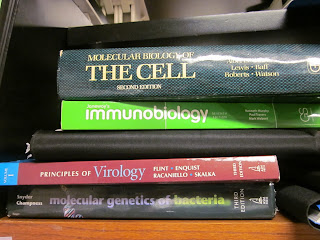 The Top 3 Posts: One of the coolest things about having a blog is getting to see all of the traffic stats on your site. The top 3 posts this past year have been about My First 5K, the bacterial Contamination Station at work, and my first recipe on the site, Indian Sweet Potato Hash. The most surprising success is definitely my bacteria post-- seems like I get a lot of Google Image traffic. 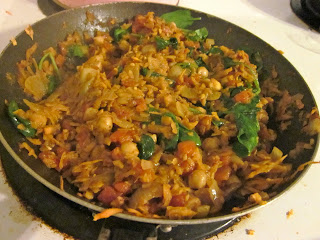 My Favorite Post: Hands-down, my Bayshore Marathon Recap post is the post I re-read most often. Probably not surprising, but it's the happiest I've felt all year for sure. And Bayshore 2012 sign-ups are coming up! 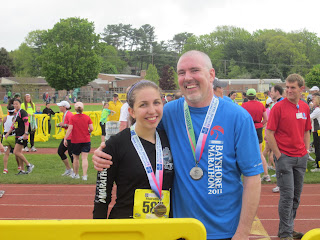 The Most Helpful Running Post: This one's a tie between 5 Ways to Make Running More Fun and Tips for Snow Running. Not everyone has to deal with running in the snow! 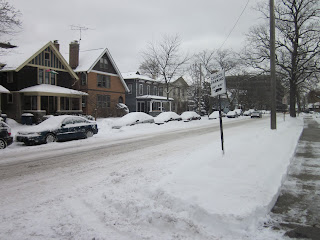 The Ugliest Post: Another really popular post includes some of the worst pictures of me on the internet, namely, the Worst Running Photos Ever. Since the last installment, I unfortunately have enough fodder for a part 2 of this series.

The Most Informative Post: My favorite informative post comes from an early series I did on the benefits of vegetarianism. While perhaps a bit science-heavy, the post about Infectious Disease and Factory Farmed Meat was interesting to research. 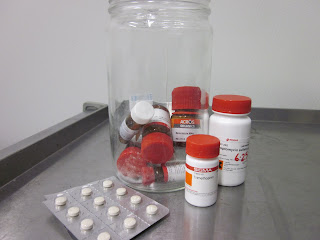 There are more posts I could reminisce over, but I have to get back to studying. With less than a month left in the semester, I'm counting down until Christmas! Thanks for reading my blog for the past year (or less!), I'm happy to have an audience (even if it's just my mom) to share with :)
Posted by Kaitlin (runforsushi) at 10:26 PM 4 comments:

Email ThisBlogThis!Share to TwitterShare to FacebookShare to Pinterest
Labels: meta

After 12 weeks of training, a few injuries and more swimming I've ever done in my life, Sunday I ran the Philadelphia Half Marathon. And it was awesome.

I stayed in Philly with some girlfriends from college, and Saturday night we prepared an amazing feast of spaghetti, green beans and salad. This meal, plus a brownie for dessert, was the perfect fuel for the next morning. 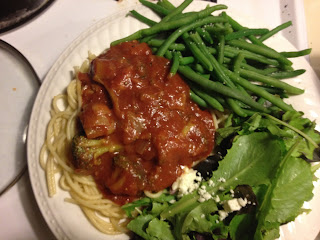 Saturday night I couldn't sleep-- I was so nervous! Training has been a little bit less than stellar, and with my longest run only being 10 miles (stupid injury) I was feeling a bit unprepared. Nevertheless, the alarm went off at 5am and after the traditional toast and coffee, I was off to the start. 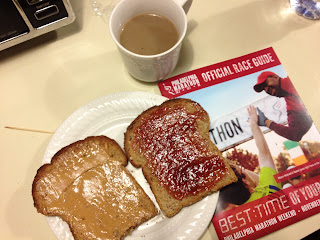 I don't think I was really prepared for how cold it was outside. I hadn't really brought much in terms of warmup gear and was super cold while waiting around for the start. After checking my one sweatshirt, I jumped into the bathroom lines just so I could huddle next to other runners for warmth. 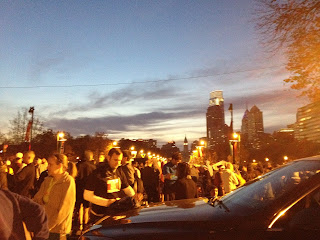 As the sun began to rise, we lined up near the Rocky steps for the national anthem. A little after 7, we were off!

My general strategy for this race was to have fun, not stop, and hopefully achieve one of the goals I made last week. The entire race I kept focusing on my favorite race mantra: In the first half, don't be an idiot. In the second half, don't be a wimp. 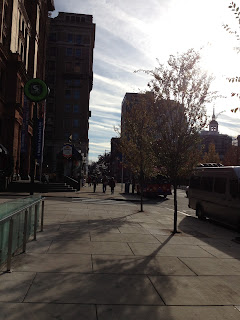 So for the first half, I kept it easy. The course was a little boring (a highway??) for the first few miles, then got more exciting as we headed into center city by all of the monuments. The crowd support was great, and the first half felt easy. 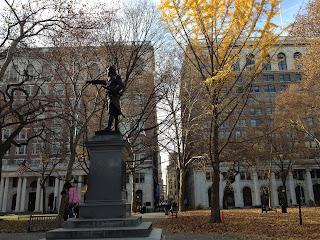 At the half, I took a Gu and prepared to kick it into high gear for the second half. But then... hills. I like hills, even! And these were killer. Especially a long, winding uphill around mile 10.

I generally took a cup of gatorade and a cup of water at each station. I'm lucky that I generally don't have stomach problems, but I do get pretty thirsty!

After we passed the giant hill and the zoo, it was a downhill ride down MLK drive into the city. The scenery was pretty, but I was tired. I was happy that I didn't feel any injuries flaring up, but was ready to be done. All the while my Garmin was marking the course as being a little long (probably due to me weaving so much) and seeing the 12 mile marker about 0.25 miles further than my Garmin read really messed with me mentally. 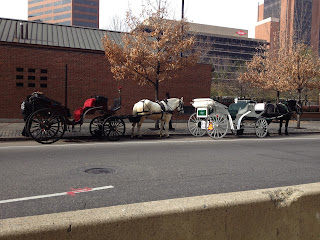 
I tried to power through for the last half. I wanted to PR so badly and knew I could if I kicked it up. I ran as hard as I could through the last half mile and crossed the line at 2:06:40. 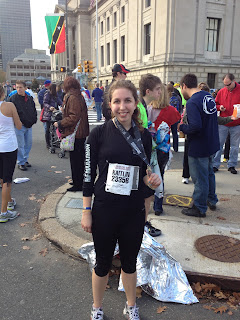 After collecting my medal, post race food and gear, I hightailed it back to center city for some food. I found an awesome little diner on 5th street and demolished a plate of eggs, Nova lox and hashbrowns. So good! 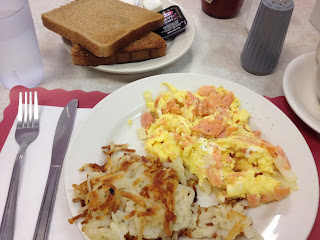 I had to head back pretty quickly to catch a flight, but I loved my time in Philly. It's a pretty city, a fun race, and full of friendly people. When I was walking back to my friend's apartment, so many random passerby congratulated me on my race! Well done, Philly.

Can't wait for my next race! Thanks again, everyone, for all of your support :)
Posted by Kaitlin (runforsushi) at 12:12 PM 2 comments:

Half Marathon week is here! Wahooooo!!!

This past week marked getting back into running (after being sidelined by the injury) and adjusting to the new dark hours (at 5pm!). 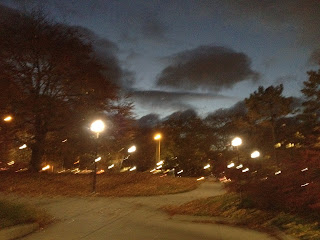 I've been trying to not run two days in a row lately. Although I really love running back to back, it might not be the best for my injury right now.


Last week went pretty well! I'm feeling great after the IronTurkey and pain-free (so far). I'm getting pumped about the race this weekend and can't wait to head to Philly. 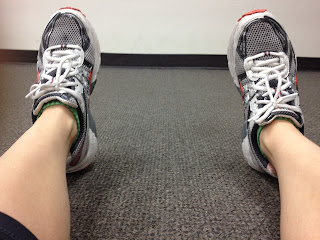 Something I've been thinking pretty hard about are my goals for this race. When I first started training, I was hoping to focus a lot on speed training and had a lofty goal: sub 2:00. Then, injury, illness and work struck, resulting in a full week and a half off of running to heal. Now I'm thinking about what's realistic to expect and strive for this weekend. 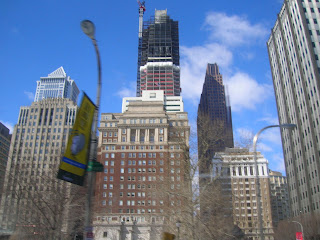 A goal: Beat my PR from the National Half. This is a goal I think is possible and will be thrilled to meet. This means an average pace of at least 9:39 min/mi.

B goal: Beat my time from the Detroit Half. I feel confident that, barring disaster, I could nail this goal. I'll need an average pace of at least 10:45 min/mi.

No matter what happens on Sunday, I know I'll finish happy, strong and proud. I'm excited to run with my friend Kourtney, visit the city of brotherly love and run a rockin' race!
Posted by Kaitlin (runforsushi) at 8:44 PM 4 comments:

My name is Kaitlin and I'm a scientist, runner and beer-lover. I don't own a tv and have a deep love for pumpkin. Here you'll find running tips, recipes and discussion on food issues. Email me with any questions or comments at runforsushi@gmail.com and thanks for stopping by!